5 Steps to Acquiring and Improving Communication Skills for Life

Home•5 Steps to Acquiring and Improving Communication Skills for Life

5 Steps to Acquiring and Improving Communication Skills for Life

Article was featured in Issue 58 – The Greatest Love of All: Family
March 27, 2017 by Dr. Cheri L. Florance • Autism Articles, Communication 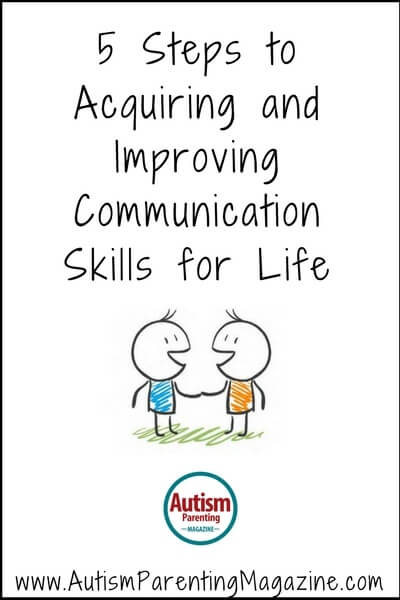 Molly was diagnosed with autism at age two. She was quiet—almost non-verbal—and did not play with other children. To communicate, she led her parents to what she wanted or needed. Molly also had severe tantrums and trouble maintaining a regular sleep pattern. She did not appear to be a typical two-year-old.  She seldom smiled or laughed.  Her parents were afraid to leave the house and avoided family get-togethers.  Only one parent could go to her brother’s sporting events because the other had to stay home with Molly.

Despite these circumstances, her mother Eileen noted that Molly was able to use her visual thinking skills very easily. She could operate the VCR, play computer games, and put together intricate puzzles with ease.  Eileen suspected there was more to Molly’s symptoms than autism.

And she was right. Molly tested at the top of the charts for her visual skills and extremely low on verbal and listening skills. Not coincidentally, Molly had several family members who were in jobs that required strong visual skills (I have found that strong visual brains tend to run in the family).  While her parents were, of course, worried about Molly’s behavior problems, they were even more focused on the goal of helping Molly learn to communicate appropriately—with words. These indicators made her a perfect candidate for my 5-step program.

I have been working with children with communication deficits my entire professional career, and my clients have ranged from children who were non-verbal like Molly, to those who were high functioning but lacking the skills to decode contexts for appropriate communication. The great majority of these children have been diagnosed with autism, attention deficit disorder (ADD), or Asperger’s.  My focus, however, is working with those who test very high for their visual skills and very low on their verbal skills.  My training at the National Institutes of Health in the area of brain science, as well as my first-hand experience with a non-verbal child who was diagnosed as severely autistic (but who went on to graduate from college and become an engineer), led me to develop a methodology for this particular profile, which I have now been using quite successfully for many years.

After I started working with Molly using my 5-step program, which focuses first on building the “brain pillars” of visual attention and memory, she gradually learned self-control. Her attention and memory improved, first in respect to using her strong visual skills, and then with verbal listening and speaking skills.  Soon, she was able to comprehend verbal reasoning and began talking to express herself. Molly’s family was thrilled with the life-changing differences, as their daughter progressed from tantrums and difficulty in communicating in her autism class, to becoming a happy, healthy child working at or above her age level in a mainstream school.

My 5-step program for strong visual learners follows a very specific set of training stages, though each child’s program is tailored to his or her specific symptoms, interests or talents, and age level:

Visual attention and memory are two of the four brain pillars that we all use to support our ability to understand the world around us. The brain relies on four pillars—visual attention, visual memory, auditory attention, and auditory memory—to help us connect our sense organs to the brain so that we can manage our everyday lives.

Because the children I work with are so highly visual, we work with their visual strengths first, focusing on harnessing their visual attention skills. Because their visual skills are their strongest asset, they experience success and rewards easily and quickly. Visual skills that we help children develop at this stage are the “zoom lens,” which allows the brain the ability to focus, concentrate, and change focus. We also train children to use their “discriminator” (the ability to compare and contrast) and to use their “scanner” (to be able to scan a picture to locate the item they want, as in a game of “I Spy”).

Auditory attention and memory are the other two brain pillars. The brain seems to favor the visual system over the verbal system, as it is the more powerful of the two. The visual system operates the way a neural system like the brain wants to function—fast! So, in visual learners, an antagonism develops between the visual and verbal systems. My chief initial goal is to stop this antagonism and initiate a supportive relationship.

As children gain mastery over their visual attention and memory skills, we begin working on auditory attention skills, using their visual skill training as a foundation for success. Auditory attention is a set of skills that we use to begin nearly every aspect of verbal communication, but we begin by having children complete exercises that involve listening to music before graduating to words and stories. Auditory attention connects what we hear to our working memory. And it is this connection that forms the essential communication skills for processing auditory-verbal information. It is also how we initially form an auditory sequential thought, which is the biological support we need to listen, read, write, and speak.

In this step, we focus on gaining self-control by using and rewarding the new skills acquired in Brain Pillar Training.

We begin introducing more exercises using auditory and verbal skills, but now we focus on learning to read and listen, while re-enforcing their new skills in visual and auditory attention and memory.

Finally, we focus on the more formal aspects of verbal skills, speaking and writing. These are the skills upon which they will most frequently be graded and assessed in school and throughout their lives.

Transferring skills and building self-esteem come last, partially as a natural outcome of acquiring the previous skills, using them, and having them constantly reinforced.

Currently, most of my clients go through the 5-step training program using all of the tools of e-learning—conferences, consultations, and weekly classes using Skype and other web-meeting formats, accessing training materials from my online libraries, sharing videos and homework through private websites—with at least one parent dedicated to on-going home supervision of exercises, along with participation in consultations and teaching sessions with me. But for some clients, I have set up a personalized “Brain Retreat” camp, with activities for both parent and child, such as the one I did for Bill and his mother.

When three-year-old Bill was diagnosed with autism, his mother said her expectations for her child went from hoping he would become a terrific professional when he grew up, to hoping that she’d have a child who would learn to speak and live independently someday. His mother sought my help when Bill was about eight years old.  Later, Bill himself described his learning problem like this: “I was just not getting work done fast because I wasn’t listening to instructions. I had distractions in my head because I was picturing things in my head.” As with Molly, Bill’s extremely strong visual skills were overriding the listening system.

For Bill, I put together a Brain Retreat camp with a program that included dancing and tennis, with lessons conducted initially without verbal instruction so that he could harness his extremely strong visual skills. Verbal instruction was gradually added to the mix, as well as art lessons, which combined the visual and the verbal.  I then worked with Bill using computer games and French lessons.  A year later, Bill won an academic achievement award and has since been succeeding in school and in his social life. As his mother put it, “His listening skills have flown through the roof, and he’s become a much nicer child to be with all the time.”

My focus is on children like Molly and Bill who, though they may have been diagnosed with autism, exhibit all the signs of having an overly strong visual brain—they test high for their visual skills and low on verbal skills, and they have close family members who work in visual professions (engineers, artists, doctors, builders, etc.). In addition, though these children may have severe behavior problems, when their parents are asked about their primary goals for their children, they always focus on the need to develop communication skills. For children like these, gaining mastery over their visual skills leads to improved communication skills. And in my experience, improved communication always leads to improved behavior and more success in school.

Dr. Cheri Florance has a dual doctorate in speech and hearing science and psychology from Ohio State University. As a clinical-research fellow for the National Institutes of Health, she studied the neuro-science of human attention-memory and processing for five years, and that research led her to develop 5-step training programs for highly visual thinkers with communication problems of attention, memory, listening, reading, speaking, and writing. This includes her own son, her third child, who, shortly after birth, was diagnosed as deaf, autistic, and severely mentally disabled. Combining her maternal instinct with her knowledge of the brain science of communication, she was able to identify the problem and develop training that eventually completely eradicated all of the child’s symptoms. He is now a college graduate and a chemical engineer. She wrote about this experience in her book, Maverick Mind: A Mother’s Story of Solving the Mystery of Her Unreachable, Unteachable, Silent Son.

Currently, Dr. Florance works with families all over the U.S., as well as internationally, using all the tools of e-learning and web conferencing. She also conducts individualized “Brain Retreat” camps in Florida. For more information: www.cheriflorance.com

Call: 866-865-9820
Write: braindr@cheriflorance.com
Or fill out a form, receive free materials, and Dr. Florance will contact you: Contact Form